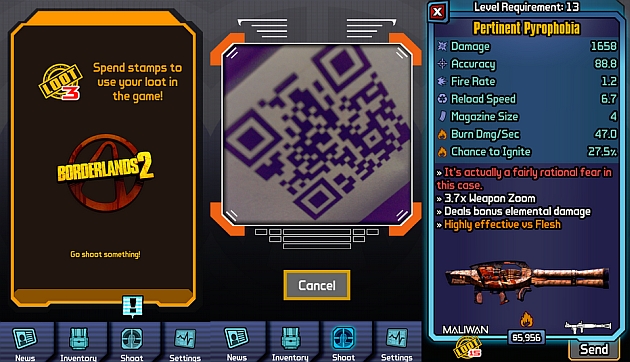 Gearbox has officially announced a new way for players to get even more loot in “Borderlands 2.” The developer has released a brand new app called LootTheWorld that allows players to scan QR codes and bar codes for in-game items.

The LootTheWorld app is currently available for free on both iOS and Android. It provides players with a QR code representing them. This code can be scanned by other players with the app in order to see what time of loot corresponds with them. In addition to this, any other QR codes and bar codes can be scanned to create in-game items and weapons. Then, by redeeming stamps (which Gearbox will be giving away codes for on Twitter and Facebook), these items can be sent into the game using a player’s Shift account.

Gearbox and the Borderlands games have been utilizing QR codes via in-game Easter Eggs. In both Borderlands and Borderlands 2, there were various QR codes that could be found which, when scanned, would reveal various messages.