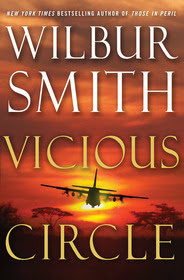 At 80 years old, Smith has remained an iconic action adventure author as three of his previous titles have also spent several weeks on the Best Seller list. Throughout his career, Wilbur has sold an estimated 130 million copies worldwide. He is ranked as one of the top 20 selling authors living today. His books include Assegai, The Sound of Thunder, Birds of Prey, Monsoon, Blue Horizon, River God, Warlock, The Seventh and The Sunbird.

Wilbur’s books are organized into series, including Ballantyne, Courtney and Egyptian. He has also has
written a series of thriller novels. The different series of books deal with topics such as colonial wealth,
historical racial battles, tribal rivalries, family fortune and misfortune, love, exile, deception, combat and
lost civilizations.

2014 marks the 50th anniversary of Smith’s first bestseller, “When The Lion Feeds.”